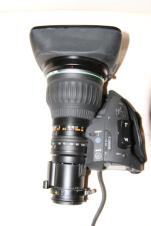 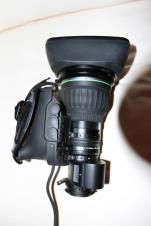 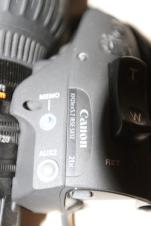 Corresponding to the digital High Definition broadcasting and diversity of HDTV equipment,
Canon has added a new series to its HDTV lens line up, the HDsc series. The new HDgc series supports the emergence of an important new generation of cost-effective HD acquisition systems. Adopting the advantages created by Canon's unique technology, the new HDgc lenses exhibit high MTF, high resolution and high contrast from the center of the image to its extreme edges, meanwhile maintaining its compact size and weight.

Another important policy of Canon's is not to pollute the earth and the HDgc series succeeded in excluding harmful substances such as cadmium, PBBS, PBDPE or mercury from the mechanical parts, and at the same time incorporating lead free glass and reducing the amount of hazardous substances used in electrical parts.

The KH21ex5.7, KH16ex5.7 and the KH10ex3.6 carry Canon’s original Enhanced Digital
Drive, a drive unit equipped with an information display and a digital function selector so that the user can customize the enhanced digital functions much more easily and precisely. The new design enables the user to fully bring out the digital functions.

By memorizing any two focal lengths, the digital drive can automatically “shuttle” between the two points, moving in either direction.

An angle of view can be preset in either of two memories and the lens will zoom to that position by pushing a simple button. During a performance, framing preset will reproduce the zoom position decided upon at the rehearsal. It is easy to repeat the same zoom as often as
you like at the highest speed or in a preset zoom speed.

A specific zoom speed can be preset in memory and it is possible to repeat the zoom speed as often as you like by pushing a simple button.

Canon is introducing a new series with a new enhanced digital drive unit which 16 bit resolution Rotary Encoder Devices has built in.

We May Also Suggest