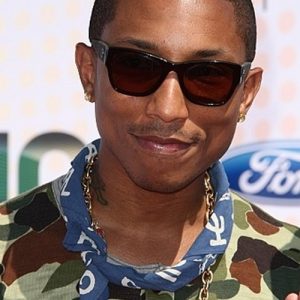 As if being featured on two of the biggest chart-toppers of the year — "Get Lucky" and "Blurred Lines" — and being nominated for seven Grammy Awards wasn't enough of an accomplishment this year, Pharrell Williams is also behind one of the year's most innovative musical concepts — the first-of-its-kind, 24-hour music video.

The music video for "Happy" — a head-bobbing track from the "Despicable Me" soundtrack — features 400 dancing extras, as well as cameo appearances from Steve Carell, Jamie Foxx, Jimmy Kimmel, Magic Johnson and Kelly Osbourne, all strutting through the streets of Los Angeles at various points of the day.

If they're able to stay awake for the whole thing, viewers can watch the entire video, back to front, over a 24-hour period, on the "24 Hours of Happy" website.

About the project, Williams told the New York Times, "I've never been connected to anything that big in my life."

And likely, neither did the crew that shot the video.

Directors Clement Durou and Pierre Dupaquier captured scenes from the video over the course of 11 days. Stedicam operator Jon Beattie told the Cinema5D blog that the crew used an Arri Alexa camera, as well as an Artemis Cine HD steadicam and Tiffen G70 arm and pro vest.

And the video equipment worked.

"Clearly authenticity was something the filmmakers were aiming at capturing, which also meant any mistakes during this exhausting shoot were part of the music video experience. Surprisingly there are hardly any noticeable flaws in terms of camera movement," Cinema5D noted.

For ambitious projects like this, New Pro Video can provide the used professional video equipment to create stunning, memorable shots.